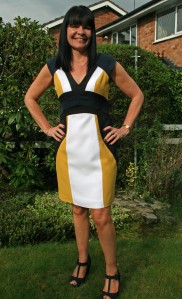 This post is a little out of the ordinary for me, I decided to share with you two garments that I have been making in tandem over the last month or so (the mind boggles!) As the story unfolds it will become clear as to why I took on the task of sewing two completely different dresses at the same time (I think you all know me well enough now to know that I thrive on the challenge). 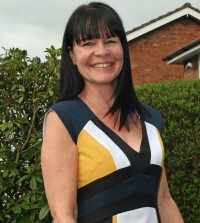 The first pattern is Vogue 1316, a fully lined panel dress, which was (how can I put it) inadvertently dangled like a carrot in front of me by Kim from Sewing-online on her Facebook page.  It is a doozy, lots going on with various different panels and colours (I just love it).  The fabric is polyester knit in various different colours which I bought from Abakhan fabrics in Manchester.  Before I began cutting out the pattern, I had to make sure the colours would coordinate well in the order I had in mind.  I downloaded the stencil of the dress and coloured in each panel (ever so organised if I do say so myself).  The only change I made was on the centre back, which should follow through with the black panels and I chose white the same as the front.

The construction started with the neck edge and progressed sideways and downwards (I was rather confused at one point). Now, with patterns such as this one, it is imperative that the seams are pressed in the correct direction. If not it can all go horribly wrong, inches can be lost forever and seams won’t match, it could cause all sorts of panic BUT thankfully my faithful friend the unpicker was always there to lend a hand if such a problem occurred.   Once the panels were assembled through the front and sides the concealed zip was inserted into the centre back pieces and this was then added to the rest.  What followed was some serious bulkiness on the seams where the white met the mustard fabric at the base of back (not a nice look) these had to come out, tampered with and reinserted. 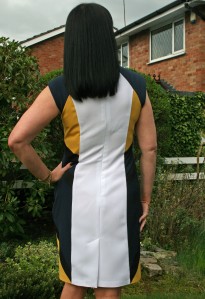 So, the dress was made more or less, the yoke which is in blue was added to the top section on the front and back, ready for the lining.  This is a straightforward three piece dress pattern which when sewn together and inserted around the neckline and the armholes, leaving  the yoke pieces open at the shoulder so the whole thing could be turned through easily.  The shoulder seams on both dress and lining were then sewn to create the final part of the dress. 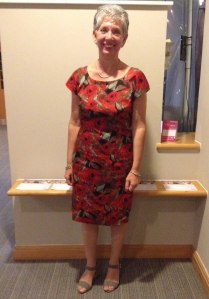 I mentioned two garments at the beginning of the post, the other one is Newlook 6013 which came  free from Sew magazine.  Mum-in-law asked me if I would make her a dress for a wedding she was attending (no pressure!) It just so happened the pattern she picked was the one I already had. We had a family outing to Manchester to get the fabric (which is simply gorgeous and a pleasure to sew I might add).  I made a toile first to make sure I had my sizing correct, which to my relief was spot on.   The construction was extremely easy (this fabric didn’t need a complicated dress it shines on it’s own), a few darts, concealed centre zip in the back and raglan sleeves (gotta love raglan sleeves, no easing them into the armhole, yay!) We had one or two fittings along the way and in between I carried on with the Vogue one, which by this time I had decided would be my dress for the evening reception at the same wedding. 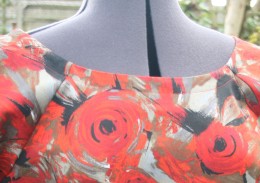 Time was of the essence, lots of thread changes and me making sure I didn’t try on the wrong dress and start making alterations all over the place.    It all came together this week and I am thrilled to say my Mum-in-law was very pleased with hers and she looked fabulous in it.  My dress was the second vogue dress I have made and as with the first one, I am extremely happy with the end result.  We went to the wedding yesterday, with heads held high comfortable in the knowledge that there definitely wouldn’t be anyone else there in the same dress. 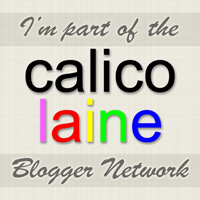